Apparently, two reporters from ABC were dispatched to follow up on a HUGE story by The New York Post implicating President Obama for riding in a bus that -- get this -- was partially made in Canada. Devin Dwyer and Ann Compton with the shocking details.

The $1.1 million jet-black rumbling bus that has been carrying Obama through the Midwest this week was designed in part by Prevost, a motor coach manufacturer based in Quebec. The New York Post was first to report this, and Provost [sic] officials confirmed this fact to ABC News.

"We just build an empty shell of a bus, and then sell them to a converter for outfitting," Prevost's Steve Zeigler told ABC News.

The U.S. Secret Service said it purchased the vehicle from Hemphill Brothers Coach Co., which is based in Nashville, Tenn.

Hemphill, which declined to discuss the presidential bus or its business generally, assembles custom motor coaches and customizes the interiors before selling the finished product directly to individuals, businesses or the government.

"We just make the shell. We don't know anything about the end user," said Christine Garant of Prevost.

Several industry sources speculated that Hemphill may have installed an American-made engine, such as a Detroit Diesel, in the presidential bus, though that could not be immediately confirmed.

Secret Service spokesman Ed Donovan said the agency based its purchase on bus design, looking for the coach with the most available space to accommodate state-of-the-art custom security modifications.

What did Obama know about the shell and when did he know it? What else of his is foreign? This will clearly sink his presidency. Thanks, Ann and Devin.
Permalink posted by Jonathan : 1:53 PM

Noah Feldman, writing in The New York Times, informs us that all Supreme Court justices are partisan tools:

Justice Antonin Scalia, for his part, naturally spends time with like-minded conservatives including Representative Michele Bachmann and Charles Koch. But when the brilliant, garrulous Justice Scalia hobnobs with fellow archconservatives, he is not being influenced any more than is the brilliant, garrulous Justice Stephen Breyer when he consorts with his numerous friends and former colleagues in the liberal bastion of Cambridge, Mass.

Exactly. Because Stephen Breyer lives in Cambridge and probably has liberal friends over for dinner, it's EXACTLY THE SAME as the "brilliant" Antonin Scalia acting in a very public and very partisan way by appearing at Tea Party gatherings organized by kooks like Michelle Bachmann and being a speaker at a conference funded by our Galtian heroes the Koch brothers. As for Cheney and Scalia duck-hunting together? Well, they weren't in the same blind! Also: Harry Truman played poker with a justice. So it's all on the level.
Permalink posted by Jonathan : 8:03 AM

I sure hope this doesn't happen on the field!

In an otherwise humdrum article about how Aaron Rodgers is ACTUALLY battling both the Steelers and the legacy of Brett Favre, Washington Post columnist Mike Wise unleashes this paragraph:

"If Aaron Rodgers can pull this off, if he can lead the Packers to a Super Bowl victory over that Steeler defense and really have the kind of game people remember, then he basically knocked Brett Favre out," said Ross Tucker, the former NFL offensive lineman and now one of the game's most candid and sharp analysts. "Right now I see Brett Favre in some imaginary boxing ring, holding onto the top rope like a bloodied and tired fighter. And Aaron Rodgers is coming in for the donkey punch to end it. If he wins Sunday, he just landed that donkey punch."

That is candid! Though I'm guessing neither Ross Tucker nor Mike Wise know what a "Donkey Punch" is, or well, maybe they do, and if they really believe that Rodgers is going to do that to Favre -- metaphorically, of course -- then, Ew.

[helpful but disturbing and kinda NSFW animation at link] 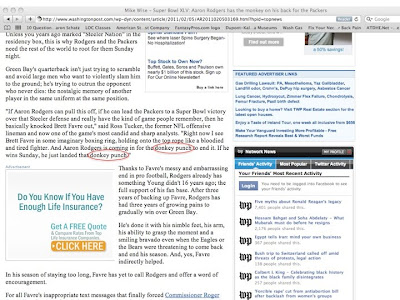 Darrell Issa and Lamar Smith are gearing up for exciting, but definitely non-witch-hunty investigations of Obama should Republicans win back the House this fall. Politico relays us the news that they'll be looking into the following:

Bailouts, Bailouts, Bailouts. No investigation poses a more significant political danger to Obama than a no-holds-barred GOP probe into TARP, the AIG bailout, the Freddie-Fannie sinkhole and the administration’s de facto takeover of GM and Chrysler.

Yes, no investigation poses more danger for Obama than a probe of the transgressions of his predecessor. Hopefully, Darrell Issa will subpoena Hank Paulson and grill him over what, exactly, he was thinking when Senator-Dictator Obama ordered him to create TARP and bailout both AIG and Fannie-Freddie.

Now, I don't know whether the author, Glenn Thrush, is a flaming idiot or whether his GOP sources sold him this bill of goods. But oh, hey look, remember this Pew Poll?

Just had a chance to watch the full tape over at the NAACP's site (it's also on YouTube). First, it's clear (as many suspected) that her tale about not helping the white farmer to her fullest was, in fact, a story about how she eventually concluded that she was wrong to have thought that way, and in fact, she needed to overcome her own biases. She goes on to describe how she personally intervened to help save the farm when the original lawyer for the farmer had decided to throw in the towel. Here are some quotes from various points in the talk:

I have come to realize that we have to work together. And it’s sad that we don’t have a room full of white and blacks here tonight. Because we have to overcome the divisions we have. We have to get to the point where – as Toni Morrison said – race exists but it doesn’t matter.

"But you know God will show you things and he'll put things in your path, so that you'll realize that the struggle is really about poor people."

1) Breitbart is a race huckster of the lowest kind -- a liar, a hypocrite and completely depraved. But we already knew that.
2) Ditto for Fox News
3) The NAACP should be ashamed of itself. They've since apologized. They should publicly apologize to Sherrod if they have not done so already.
4) Tom Vilsack should be ashamed of himself and should resign.
5) If what Sherrod has said -- that pressure was applied by the Obama administration USDA to fire her -- then they are a bunch of spineless nitwits who deserve all the vitriol being hurled at them.

Here's a transcript I've roughed out:

But you know God will show you things and he'll put things in your path, so that you'll realize that the struggle is really about poor people.

I was struggling with the fact that so many black people have lost their farmland. And here’s I was faced with having to help a white person save their land. So I didn’t give him the full force of what I could do. I did enough so that when he – so that when I assumed that the Department of Agriculture had sent him to me –[unintelligible] the Georgia Department of Agriculture –

And he needed to go back and report that I did try to help him. So I took him to a white lawyer that had attended some of the training that we had provided. Because Chapter 12 bankruptcy had just been enacted for the family farm. So I figured if I took him to one of them, that his own kind would take care of him. That’s when it was revealed to me that it’s about poor vs. those who have. And not so much about white – it is about white and black – but it opened my eyes. Because I took him to one of his own. And I put him in his hand, and said ‘OK, I’ve done my job.’

But during that time we would have these injunctions against the Department of Agriculture, so they couldn’t foreclose on him. And I want you to know that the county supervisor had done something to him that I had not seen yet, that they had done to any farmer -- black or white. And what they did to him caused him not to be able to file Chapter 12 bankruptcy.

So everything was going along fine, I’m thinking, he’s being taken care of by the white lawyer. And then they lifted the injunction against USDA, in May of ‘87. For two weeks – and he was one of thirteen farmers in Georgia who received the foreclosure notice – he called me. I said, ‘Well go on and make an appointment at the lawyer, let me know when it is, and I’ll meet you there.’

And then about 7 days before that man would have been sold at the courthouse steps, the farmer called me and said the lawyer wasn’t doing anything. And that’s when I spent time there in my office calling everybody I could think of to try to help me find a lawyer who would handle this. And finally I remembered I had gone to see one 40 miles away in [unintelligible].

I have come to realize that we have to work together. And it’s sad that we don’t have a room full of white and blacks here tonight. Because we have to overcome the divisions we have. We have to get to the point where – as Toni Morrison said – race exists but it doesn’t matter.

We've tried to eliminate disappointment, run it off like a deadly virus. The world's most potent economy collapsed when too many people decided they couldn't bear to be disappointed. They bought houses they couldn't afford and cars they didn't need. They believed that a parent's most appalling failure is a disappointed child. Oh, no, we can't disappoint the children. Lord forbid we allow our kids to be deprived. The dirtiest word in the English language: no.

Tim, I hate to break it to you, but the world's most potent economy didn't collapse because some people bought mortgages and cars they couldn't afford. If that was all that happened, we'd have a minor problem in the housing and car loan sector of the economy. The reason everything turned to shit in 2007-08 is because insane people on Wall Street used those garbage mortgages and loans as play money to make crazy, Ponzi-scheme-type "products" called Collateralized Debt Obligations and Credit Default Swaps, which, if you didn't know any better, looked like they were programmed to fail. The nitwits who ran our large financial institutions were either clueless or complicit in the scam, and the American taxpayer was ordered to foot the bill for their stupidity.

Also, Tim: No one forced anyone to take out a mortgage they couldn't afford. Loan originators resold their stuff up the chain, and didn't have to worry whether what they "originated" was good or not ("Liar Loans" anyone?) -- In fact, if you believe Michael Lewis's new book, the people in charge of packaging this stuff actively sought out suckers like recent immigrants with thin (but decent) credit histories so that the ratings agencies would give their stamp of approval on the package. Is that the fault of the mortgage-holder?